Get ready for an epic night spent dancing in the dark to classic rock tunes.

Bruce Springsteen and the E Street Band are touring the world in 2023, and one of their first stops will be the Amway Center in Orlando.

The legendary heartland rocker and his longtime backing band will play hits from their 50-year career. You’ll also hear tracks from newer albums, including 2020’s Letter to You and 2022’s Only the Strong Survive. Tickets to the concert start at $200.

Here’s what you need to know before the Boss takes the Amway Center stage on February 5, 2023, at 7 p.m.

Bruce Springsteen: Born in the U.S.A.

Bruce Springsteen grew up in Freehold, New Jersey, just inland from the beaches and boardwalks of the Jersey Shore.

Like many rockers of his generation, he found his calling while watching the Ed Sullivan Show. The first spark of inspiration came when Elvis swaggered onto Ed Sullivan’s stage in 1956. Springsteen, 7 at the time, asked his mother to rent him a guitar. That time around, he didn’t stick with the instrument.

But Springsteen’s interest was piqued again in 1964 when the Beatles took the stage.

This time, the teenage Springsteen bought his own guitar and got serious about playing.

Guitar in hand, Bruce Springsteen started playing at venues along the Jersey Shore, including the iconic Stone Pony in Asbury Park.

He forged friendships with other local musicians. Many of these performers went on to play in the E Street Band, named after a street in nearby Belmar, New Jersey. Through the years, E Street Band members have included Garry Tallent, Vini Lopez, Steven Van Zandt, Springsteen’s wife Patti Scialfa, and the late Clarence Clemons.

Springsteen proved to be born to run a band. He got his nickname “the Boss” from his bandmates while managing their payroll.

The Thunder Road to Success

In 1973, Bruce Springsteen released his first two albums, Greetings from Asbury Park and The Wild, the Innocent & the E Street Shuffle.

Critics commended the albums for their complex lyrics, social commentary, and high energy. But neither one broke into the top 50.

Springsteen’s third album, Born to Run, catapulted him and the E Street Band to fame. Songs like the title track, “Thunder Road,” and “Tenth Avenue Freeze-Out” remain radio staples today. To date, over 7 million copies have sold. After that, Bruce Springsteen and the E Street band released a series of moderately successful albums before releasing their next major hit.

Bruce Springsteen has, to date, released 21 albums and won 20 Grammys. He has also won Academy and Golden Globe awards for songs he contributed to the Philadelphia and The Wrestler soundtracks. He was inducted into the Rock and Roll Hall of Fame as a solo artist in 1999. In 2014, the E Street Band earned the same honor, with Springsteen giving their induction speech. 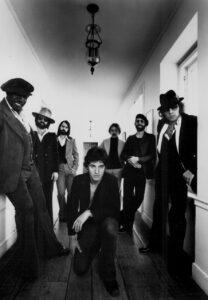 Have a Boss Vacation at Rosen Shingle Creek

As Bruce Springsteen sings in “Hungry Heart,” everybody needs a place to rest.