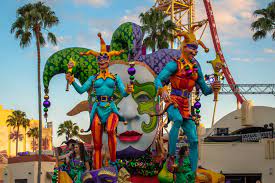 Let the good times roll at Universal’s Mardi Gras: International Flavors of Carnaval! The 2023 celebration goes beyond the bayous of New Orleans to honor Carnival traditions from around the world. This beloved Universal Orlando Resort event runs from February 4 to April 16.

Here’s what you can expect this spring.

Universal Studios Florida hosts the biggest, most authentic Mardi Gras parade in Orlando. Line up along the parade route to catch beads from colorful, elaborate floats.

To be a part of the action, upgrade to the Mardi Gras Float Ride and Dine Experience. This package secures your spot on a parade float. You’ll also get a tasty three-course meal from one of four restaurants.

Throughout the event, the sounds of authentic New Orleans jazz will fill the theme park.

The concert series is included with general park admission.

No matter what you’re in the mood for, Universal Orlando has a treat to satisfy your craving. You can feast on traditional Cajun dishes like crawfish boil or beignets. Or sample exciting international foods such as coconut curry shrimp laska and samosas.

Grab a souvenir to mark the occasion at the Mardi Gras tribute store. The store features themed decorations from past Mardi Gras celebrations. Beads and merchandise are available for purchase.

Roll on Over to Rosen Shingle Creek

When planning your Central Florida vacation, book a room at Rosen Shingle Creek.