Halloween Horror Nights Returns for its 31st Year of Fear

The award-winning event will return to Universal Studios Florida for select nights between September 2 and October 31, 2022. The separately ticketed event — prices starting at $74 — is recommended for gutsy guests 13 and older.

Feeling fearless? Here’s what you’ll find lurking in the darkness at Halloween Horror Nights in 2022. 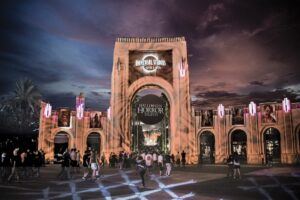 HHN is famous (or, rather, infamous) for its themed haunted houses. Once you enter one, your only way out is through a macabre, monster-filled maze. You never know when a scareactor will jump out and give you the fright of your life. Many of the houses draw inspiration from popular horror franchises, while others are Universal’s own creepy creations.

In 2022, there will be 10 haunted houses at Halloween Horror Nights.  Universal Orlando has announced the following thrilling themes:

Lines for the haunted houses can be scarily long. If you’re dead-set on doing all 10 houses in a night, consider buying a Halloween Horror Nights Express Pass. This upgrade fast-tracks you to the front of each house’s line.

Think you’re safe outside of the haunted houses? Think again.

When exploring Halloween Horror Nights, it’s easy to feel like you’re the star of your own horror movie.

A selection of Universal Studios rides will stay open during Halloween Horror Nights.

Trade your chills for thrills while you board rides like Hollywood Rip Ride Rockit, Harry Potter and the Escape from Gringotts, and Revenge of the Mummy. Lines for these attractions tend to be shorter during Halloween Horror Nights. But if you spring for a Halloween Horror Nights Express Pass, it will get you right on these rides, too.

You’re likely to work up an appetite while running through the fog. 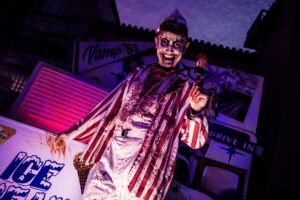 Luckily, there will be plenty of devilishly delicious food at Halloween Horror Nights 2022. You can get everything from colorful candy apples to fan-favorite Twisted Taters. You can also quench your thirst with creative cocktails, craft beer, and ice-cold soft drinks.

When you’re ready to escape the big frights and freaky sights, head to Rosen Shingle Creek.

Our stunning Orlando hotel is 10 minutes from all the Halloween Horror Nights action. Unwind in a gorgeous guestroom with spectacular views of a lush Floridian landscape. As our guest, you’ll also enjoy our four heated pools, tennis courts, nature trail, and discounted rates at our on-site golf course.